A panoramic view from above the Tierhoek campsite

In my previous blog I touched on the Richtersveld in general (click here to see).  Again, I am no aficionado, this was my second time going but it truly is a special place.  When looking into going to the Richtersveld, obviously the SANPARK’s area is well documented and you can pick up a phone and ask questions about the campsites etc.  But there are lots of areas outside the park which are run by communities and are still a part of the Richtersveld.  Tierhoek is one of these and like many community run sites in Namibia and Northern Cape, they seem to have been started out as a community initiative that over time has been neglected.  Regardless, Tierhoek is a must if you are happy to ‘rough it’ for a night or two as this is a stunning and photogenic spot with its soaring orange boulders, panoramic vista from the campsite, the leaning toilet (which the kids found hysterical) and an old sunken car or two. 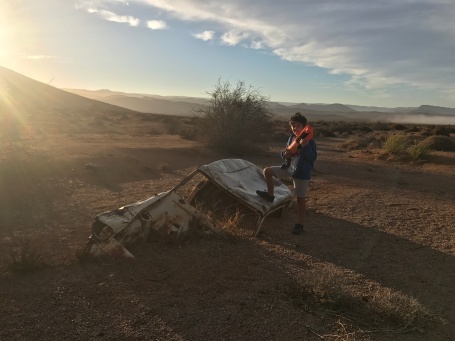 Jesse loved this car!  It seemed to capture his imagination completely

The sight is on a slight rise at the base of a kloof and from the campsite you look down over the plane.  The silence and the stars at night are incredible.  The first time there we got to watch a thunderstorm in the distance with lightening brightening the sky and stars lighting up the foreground it was an epic show of nature. 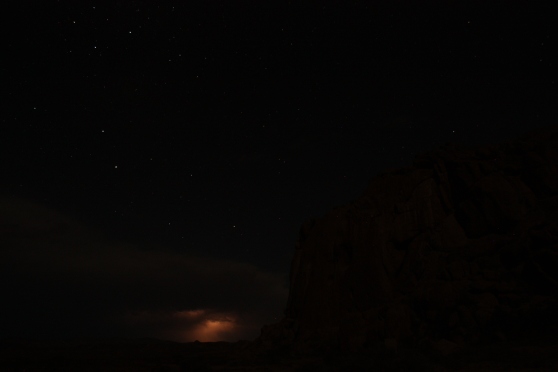 There are a few various places to camp up the little valley, but both times we have camped at the top where there are big boulders and two unused reservoirs.  The first time  there was not a breath of wind when we setup camp but maybe the thunderstorm in the distance should have tipped us off.  During the night it slowly started to pick up and our winner of a campsite became hell.  People had chucked their plastic bottles and cans into the empty reservoirs.  This means that at night the bottles and cans get blown around the reservoir forming the noisiest orchestra possible! We lay there for an hour hoping that the wind would soon stop…to no avail!  Pillows were put over heads and my husband huffed and puffed while tossing and turning – the kids typically slept on obliviously.  Simon finally climbed into the reservoir in the early hours of the morning and took the biggest culprits out, but it was a very long night!  This time we sent the kids in with leather gloves and a black bag as soon as we set up camp.  They found it hysterical chucking out the cans like missiles! 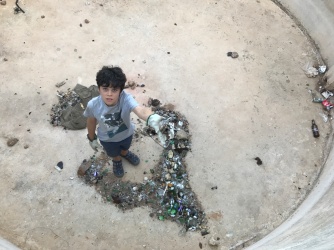 Jesse collecting the trash from the reservoir 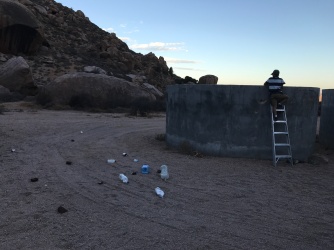 In the morning a fog bank rolled in over the plane and watching the big boulders turn orange around you as the sun rises is magic.  After packing up camp, we took a hike to the top of the koppie and the view is breathtaking.  There is no specific path and you can boulder hop your way up.  It is a very easy one to do with the kids and they loved the feeling of being on top of the world. 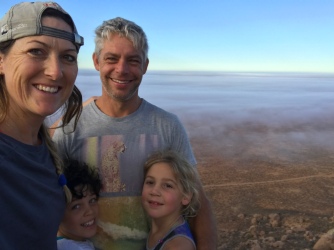 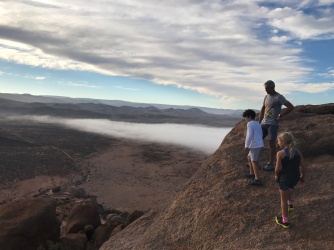 Another hit with the kids is that the campsite also has a network of boulder caves that they had a ball climbing through.  They start right behind the braai area and come out around 10m behind the campsite.  Send a dad in first just to check that there are no ‘critters’.  They were also seriously chuffed to find a huge scorpion when they did the required scorpion hunt with the UV light but otherwise there were no other encounters.

Seriously, if you are en route to the Richtersveld National Park, you won’t regret stopping here for a night en route. 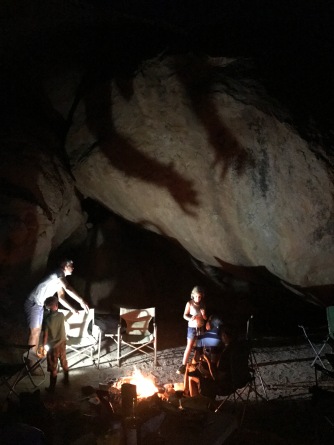