Setting up camp in the riverbed next to the mine.

The Fluospar Valley, like Tierhoek, doesn’t have a lot said about it online.  Again, like Tierhoek, it is part of the community initiative but we never saw anyone to pay any camping fees to.  I did find basic fees and info here.

I wasn’t too sure what to expect.  Simon had been before and raved about this old abandoned mine with Fluospar just lying everywhere and crystals that you could find scattered around.  He didn’t exagerrate!  The kids had a ball finding all different gems and rocks and then also throwing the fluospar in the fire that night where it then burns bright green. 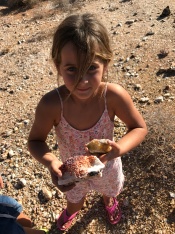 The drive in was not too hairy and very accessible in a 4×4 and the trailer had no problem.  We got there a bit late so camped in the riverbed next to the mine as we would have gotten to the ‘official’ camp area in the dark. 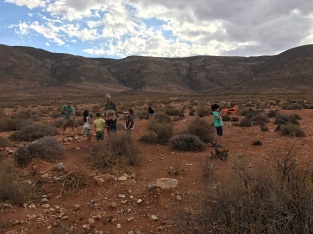 We even had a light rain shower en route in, which feels like a little miracle when you are in such a barren area.  Camping next to the mine was perfect.  The kids did the obligatory scorpion hunt, but didn’t find much.

The kids with the UV lights (and gloves) looking for scorpions

On the GPS, there was noted that there was a spring 30-40mins from the mine.  So the next morning we decided to head up and see it.  Well the drive took us nearly 2hours and the going was rough.  It was sandy, hot and the spring a bit anticlimactic.  So, I wouldn’t recommend the detour unless you are spending two nights at the mine and just want to do a day drive.  To do the drive and then still have to come back and head out of the valley severely limits your time.  If you are going to the spring and have a trailer, we would recommend off hooking it and fetching it on the way back.  But the safety is always an issue as there are herders around, but it should be fine.

We did take a drive down to the old deserted mining village.  There was the obligatory deserted old car, crumbling houses and old windmill.  You can have such fun taking pictures here.

So if you are going to the Richtersveld, I would definitely recommend doing the Fluospar Valley en route to Tierhoek before heading into the official park.