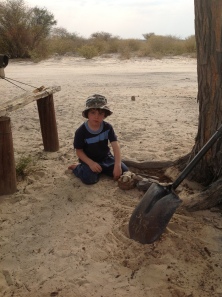 My son Jesse has two passions which come with us everywhere.  First is the infamous DoggyDogg.  He has had it since birth and if you picture Calvin&Hobbes…that is Jesse and DoggyDogg!  We have had near bloodshed in our house when my husband and Jess went for a walk and came back without DoggyDogg (he was found a day later sleeping with a homeless couple)!  And do you think we can find a second one as backup?  The internet has been searched high and low across continents.  Come hell or high water, he will not be left behind either.  This is because he needs to come along on adventures, according to my son, much to the chagrin and trepidation from my husband and I.

Secondly are his dinosaurs.  We have lost many a dinosaur which has been left hunting in a sand dune or digging in a desert.  Last weekend we had to kayak back to shore from our sail boat as Jess had suddenly realized that he had left his prize dinosaur along with 5 others on shore, even though we had told him repeatedly to pack up (or rather not take them at all).

A dinosaur crosses the Gamkab Canyon in Namibia

I am a big one for taking responsibility for your actions and learning from the consequences, but when your child is literally ugly crying from the loss and you are able to maybe send out a rescue and retrieval then I am sure I am not alone in attempting a harmonious reconciliation.  Obviously only if it is within my capabilities, hoping that he (or rather us) will learn from this and not do it again….till the next time.

So it is all very good and well to go search for the toys down the road from our house or at a friends place, but when you are moving everyday on your holiday covering vast distances the options of going back aren’t really possible.  So we have tried to make our lives easier by doing the following:

Kids do not need to take a lot.  I find it amazing how many times we have taken things along but only a few ever really got played with.  They will make do with what they have where they are and imagination is a wonderful thing when left to bloom.

“Logic will get you from A to B.  Imagination will take you Everywhere”